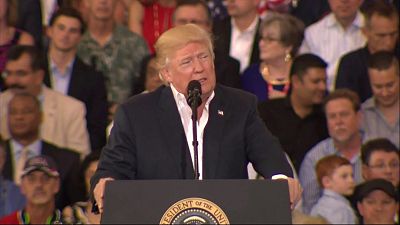 Donald Trump has once more lambasted the so-called dishonest media.

Unusually for a sitting US president, he held an election campaign-style rally in Florida. During his address, he said he wanted to speak to the people “without the filter of fake news.”

Trump threatened to ‘continue to expose them’, adding:

When the media lies to people I will never ever let them get away with it.

“When the media lies to people I will never ever let them get away with it, I will do whatever I can that they don’t get away with it. They have their own agenda and their agenda is not your agenda.”


Here's a photo of President Trump's crowd of 9,000 in Florida tonight: pic.twitter.com/MVgWc3wnsI


He also vowed, once more, to ‘downsize the bloated bureaucracy’ and ‘drain the swamp’ in Washington.

I say we cannot continue to let Obama fly around on Air Force 1, at a cost of millions of dollars a day, for the purpose of politics & play!


Trump repeated several of his election pledges, including the strengthening of US borders and the introduction of a new healthcare plan, among others.

He also sought to assuage fears of turmoil in the White House by insisting it ‘is running so smoothly’.

Protesters at rallies around the country appeared to disagree. In New York, demonstrators wearing black held a fake funeral for the American presidency.


Anti-Trump demonstrators in New York stage New Orleans-style funeral procession to protest what they see as the passing of the US presidency pic.twitter.com/6NSjDVuxN4