<p>Bank roller of TP Mazembe and former governor of Katanga province in the Democratic Republic of Congo, Moise Katumbi, has confirmed his return to his country. His return is in order to accompany the late leader of the Congolese opposition to his last residence.</p> <p>“I will return with the remains (of Tshisekedi) to Kinshasa,” said Moise Katumbi on his arrival at the Basilica of Koekelberg in Brussels, where the requiem mass of Mr. Tshisekedi was held.</p> <p>Katumbi risks arrest on his return because a court has sentenced him to three years imprisonment in a property misappropriation case. </p> <p>Moreover, there is also a case of recruiting mercenaries against him still pending in the courts. Katumbi co-founded the group “Rassemblement”, a political coalition of opposition parties led by Tshisékédi .</p> <p>Etienne Tshisekedi’s supporters want President Kabila to appoint a new Prime Minister as the agreement obtained under the aegis of the Catholic Church mediation (Cenco) recommends.</p> <p>Etienne Tshisekedi died in Brussels on Wednesday, 1st February at 84 years old. He was the emblematic figure of the Congolese opposition which negotiated with the government the establishment of a period of political transition until the election of president Kabila’s successor.</p> 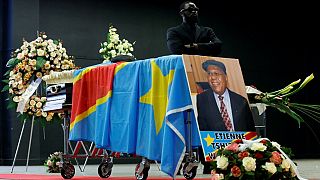