Trump under fire in Ivanka row 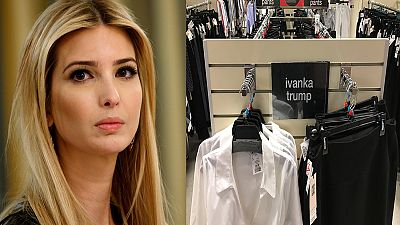 My daughter Ivanka has been treated so unfairly by Nordstrom. She is a great person -- always pushing me to do the right thing! Terrible!

Nordstrom blamed poor performance for the move saying: “Sales of the brand have steadily declined to the point where it didn’t make good business sense for us to continue with the line for now.” The group is unlikely to be too upset about the whole affair, given their shares have shot up 4.1 percent since the president’s criticism.

Trump tweeted: “My daughter Ivanka has been treated so unfairly by @Nordstrom. She is a great person — always pushing me to do the right thing! Terrible!”

White House Press Secretary Sean Spicer then proceeded to take up Ivanka’s cause in a move which has sparked outrage.

Spicer told a press conference: “Well, I think there’s clearly a targeting of her brand and it’s her name still out there, so she’s not directly running the company, but it’s still her name on it and there’s clearly efforts to undermine that name based on her father’s positions on particular policies that he’s taken. This is a direct attack on his policies and her name.”

Trump’s administration has already come under fire for “blurring fact and fiction”. Now it seems Trump himself is having difficulty distinguishing between the roles of father, businessman and president.

Democratic senator Bob Casey has called for the matter to be referred to the Office of Government Ethics.

US House of Representatives minority leader Nancy Pelosi said: “I think it’s inappropriate, but he’s a totally inappropriate president, so it’s totally in keeping with who he is. What I think is more inappropriate, though, is for him to refer to a judge who made a ruling that he didn’t agree with as a ‘so-called judge’. Now we’re talking about the separation of power, not the thin skin of an incompetent president.”