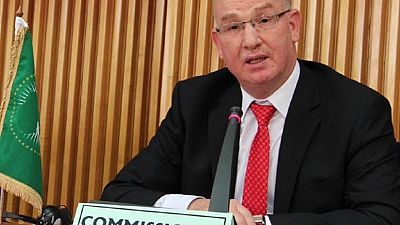 <p><strong>African Union (AU) Commissioner for Peace and Security Smail Chergui said the pursuit for peace and security in Africa has seen substantial achievements, adding that more consultations are needed to accelerate the process.</strong></p> <p>The commissioner gave the remark during the 28th AU Summit in the Ethiopian capital of Addis Ababa.</p> <p>He reiterated that terrorism still poses a significant threat to Africa, with extremist groups such as al-Shabaab, Boko Haram and the so-called Islamic State (IS) remaining rampant, adding that the AU has established a high-level committee to address the issue.</p> <p>One of the top priorities on the AU’s current agenda is the Libyan crisis. The union held a series of meetings on the issue in Brazzaville, the Republic of the Congo, on Friday and reached a number of agreements. </p> <p>Chergui stated that the AU is urging parties involved, especially the Libyan government and parliament, to resume political dialogues.</p> <p>“You also know that the plight of the humanitarian situation which is also very difficult there, in terms of refugees but also displaced persons in the same country. So I think the high-level committee has identified some of the main sectors where we will be working with the Libyans,” he said.</p> <p>He assured that the AU, the UN and the regional bloc — the Intergovernmental Authority on Development (<span class="caps">IGAD</span>) will make concerted efforts to handle the South Sudan issue, calling on the country to end hostile acts immediately.</p> <p>“There is a determination from the African Union, <span class="caps">IGAD</span> — which remains the main player with our support — and UN to work hand-in-hand. And I think you have seen the communique of the meeting that we had here with the new secretary general of the UN on this matter and we [have come to] the same analysis and the same determination to act in the best way,” he added.</p> <p>Speaking on Somalia the commissioner expressed that the AU will keep helping secure elections in the country, and help combat the home-grown al-Shabaab militant group.</p>

You also know that the plight of the humanitarian situation which is also very difficult there, in terms of refugees but also displaced persons in the same country.