Guinean President Conde takes over from Deby as AU Chairperson 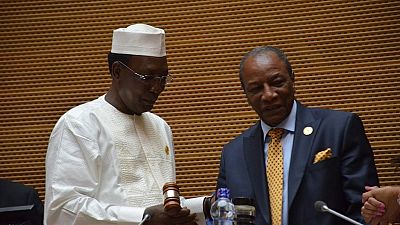 Guinean President, Alpha Conde, has been elected the new chairperson of the African Union (AU). He takes over from Chadian President Idris Deby who till today was AU leader.

African Heads of State are currently meeting at the 28th AU ordinary summit at its headquarters in the Ethiopian capital, Addis Ababa.

The Chairperson of the African Union is the ceremonial head of the Union. He/she is elected by the Assembly of Heads of State for a one-year term. It rotates among the continent’s five regions – North, Central, East, West and Southern African regions.

The incumbent (in this case Alpha Conde) will in this capacity, chair the biannual summits and represent the continent in various international fora such as Tokyo International Conference on African Development (TICAD) The Forum on China–Africa Cooperation (FOCAC), the Group of 8 G8 and G20 summits.

Idris Deby took over from Zimbabwe’s Robert Mugabe who served as the fourth Southern African holder of the post. Each chairperson is assisted by a bureau of three vice-chairpersons and a rapporteur.