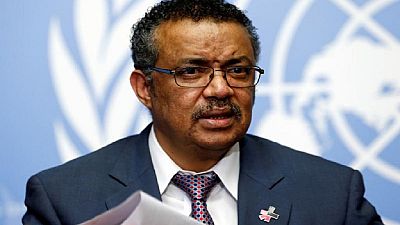 Tedros Adhanom Ghebreyesus, Ethiopia’s immediate past Foreign Affairs Minister is getting close to becoming the first African to fill the position of Director-General of the World Health Organization (WHO).

He made the final shortlist of three candidates picked by the WHO’s Executive Board. The next head of the global health outfit will be picked from the three.

51-year-old Tedros is joined by the United Kingdom’s nominee 67-year-old Dr David Nabarro and 53-year-old Pakistani Dr Sania Nishtar. Tedros is seen as Africa’s candidate and he has gone round the continent meeting leaders to solicit for their support.

I (also) thank the Government of Ethiopia for letting me now focus on my candidacy for Director-General of the World Health Organization.

He served in two ministerial capacities back home over the last twelve years. First, as a Minister of Health for eight years before taking the top diplomatic portfolio for the last four years.

Last year he wrote on his official facebook handle: ‘‘I have been humbled to serve my country in many positions …… I am extremely grateful to the Ethiopian people and the Government of Ethiopia for allowing me to serve our great country.

‘‘I also thank the Government of Ethiopia for letting me now focus on my candidacy for Director-General of the World Health Organization,’‘ he added.

He was replaced as Foreign Affairs Minister by Workneh Gebeyehu, who was formerly Transport Minister. Ethiopia’s foreign relations have taken a hit in the past year following heavy security clampdown on anti-government protesters in the Oromo and Amhara regions.

The election of a new WHO boss has been necessitated by the imminent exit of Margaret Chan. All Member States will choose among the three nominees by voting at the World Health Assembly in May 2017. The new Director-General will take office on 1 July 2017.

The Director-General is WHO’s chief technical and administrative officer and oversees the organization’s international health work. The current Director-General, Dr Margaret Chan, was appointed in 2006 and will complete her second term on 30 June next year.