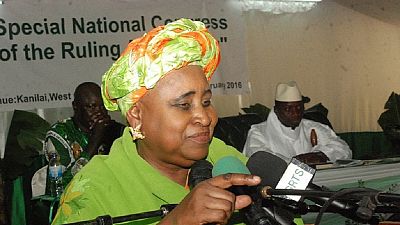 Gambia’s Vice President has joined eight cabinet ministers to resign in the face of the political impasse in the country sparked by President Yahya Jammeh’s refusal to step down.

Their resignation comes hours before the mandate of Yahya Jammeh and his government comes to an end.

According to Gambian journalist Alhagie Jobe who confirmed the resignation, thousands of tourists and foreign nationals have also flooded the Banjul airport in an effort to return home as the crisis deepens.

The United States, United Kingdom and other European countries advised their citizens in the country to leave immediately.

President Yahya Jammeh declared a three-month state of emergency on Tuesday starting from January 17 to April 17, 2017.

He also ordered the security forces, who pledged allegiance to him, to maintain law and order in the country during the period.

The resolution was passed by the country’s National Assembly after a motion was tabled by Majority Leader Fabakary Jatta on Tuesday morning. the Assembly also approved a resolution extending its life for 90 days effective from April 11 to July 11, 2017.

President Yahya Jammeh’s petitions at the Supreme Court to annul and rerun the December 1 polls, as well as halt the inauguration have not yielded any fruit as a result of the unavailability of judges who only sit in May and November.

ECOWAS has attempted resolving the issue by convincing Jammeh to step down, yet mediation efforts remain inconclusive.