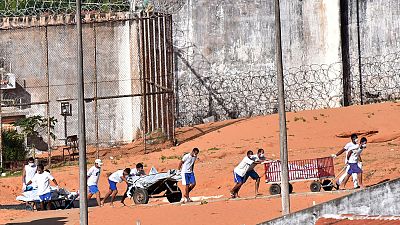 At least 27 inmates have now thought to have died in the latest violence to erupt in a Brazilian prison.

The death toll is three times what was originally reported by the authorities who have warned it could go higher.

On Saturday afternoon, violence broke out between members of rival gangs at Alcacuz prison in Natal city in northern Brazil, starting a riot which lasted until a dawn raid the following day.

Some of the victims are said to have been decapitated.

Relatives of the inmates were forced to wait anxiously outside the prison gates for news.

As with “other prison riots”:http://www.euronews.com/2017/01/09/more-beheadings-in-latest-jail-violence-in-brazil across the country earlier this month, the bloodshed was part of an escalating feud between Brazil’s most powerful drug gangs, which ended an uneasy working relationship about six months ago.

Their split, which is thought to have happened last year, has unleashed a war with state prisons as their epicenter. The Rio gang has teamed up with five fellow groups around Brazil to counter the PCC’s growing might.

Some 140 inmates have died in gang warfare since the start of the year.