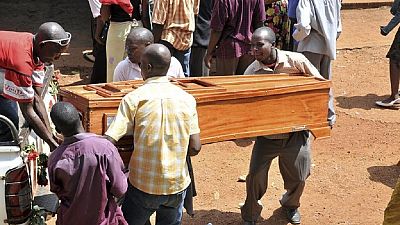 A Ugandan civil servant instructed his wife to bury him with a cash amount of 200 million Ugandan shillings (equivalent to $55,000). The money was meant to appease God for the deceased’s earthly sins.

52-year-old Charles Obong until his death was a senior personnel officer at the Ministry of Public Service for a decade (2006 – 2016). His son-in-law confirmed that his will stated that his wife should deposit a huge amount of money in his coffin.

The money was to be given to God on the Day of Judgment as an offertory so that his sins could be forgiven. Even though the exact sin was not stated, he asked his brother and sister to ensure that his wife does as he instructed.

Uganda’s Daily Monitor news portal reports that he died on December 17, 2016 after a protracted illness and was buried in his ancestral home in the northern Lira district of the country. The portal adds that the metallic coffin he was buried in cost 20 million shillings ($5500).

His will was however ‘violated’ over the weekend after his remains were exhumed and the money removed by his clan members.

Uganda parliament in September announced $20,000 funeral package for each lawmaker as a way of ensuring deceased members of the National Assembly are given befitting burials. The parliament planned to spend 67.7 million shillings on burial for each member who died.

A break down of the 67.7 million shillings funeral expense