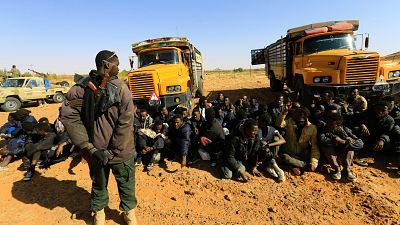 <h3>A pro-government militia group in Sudan says that it has saved some 115 hostages from the clutches of human traffickers in the desert along Sudan’s border with Libya and Egypt, <a href="http://www.worldbulletin.net/world/182854/south-africa-president-tells-people-to-not-visit-israel" target="_blank">sources say.</a></h3> <p>The chief commander of the Sudanese Rapid Support Forces (<span class="caps">RSF</span>) Mohamed Hamdan Dalgo told the media on Sunday that majority of the victims were from neighboring countries, including Ethiopia, Eritrea and Somalia.</p> <p>The force also said it has intercepted 1,500 illegal migrants on the Sudanese-Libyan border during the last seven months.</p> <p>Sudan is considered as a country of origin and transit for the illegal migration and human trafficking, as thousands cross its territories on their way to Europe through Libya or Egypt.</p> <p>Sudan has been under US economic sanctions since 1997 and remains on the US list of state sponsors of terror, <a href="http://sudantribune.com/spip.php?article61334" target="_blank">reports the Sudan Tribune.</a></p> <p>Washington admitted Sudan’s cooperation in the anti-terror war but now points that it wouldn’t remove Sudan from the list of states sponsor of terrorism or left economic sanctions before the end of armed conflicts in Darfur region and Blue Nile and South Kordofan states, the Tribune further reports. </p> <p>It adds that last year, the European Union granted a €100m development package to address the root causes of irregular migration in Sudan. The financial support came after pledge by the Sudanese government to cooperate with Brussels to stop human trafficking to Europe.</p> <p>In January 2014, the Sudanese parliament approved an anti-human trafficking law which punishes those involved with human trafficking with up to 20 years imprisonment.</p> <p>The <span class="caps">RSF</span>, which is widely known as the Janjaweed militias, were originally mobilized by the Sudanese government to quell the insurgency that broke out in Sudan’s western region of Darfur in 2003.</p> <p>The militia was reactivated and restructured again in August 2013 under the command of <span class="caps">NISS</span> to fight the alliance of rebel groups from Darfur region, South Kordofan and Blue Nile states following joint attacks in North and South Kordofan in April 2013.</p>