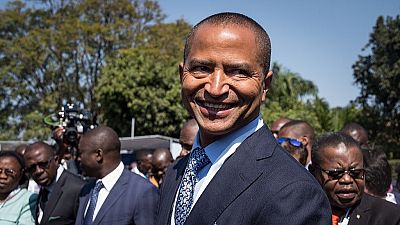 <p>An opposition leader of the Democratic Republic of Congo, Moise Katumbi, has declared his candidacy for the country’s presidential election agreed to be held in 2017.</p> <p>He declared his intention days after the country’s political actors signed a deal mediated by the Catholic Church (<span class="caps">CENCO</span>) to hold elections in 2017 instead of the previous April 2018 date.</p> <p>“I will continue to fight towards the rise of the Rule of Law … This is why I will be candidate for the upcoming Presidential election in 2017,” Katumbi said in a statement released on Tuesday. </p> <p>The former Governor of Katanga Province has been in a self-imposed exile in Belgium after he was convicted and later sentenced in absentia to 36 months in prison and a fine of $6 million in a property appropriation case which he described as political distractions.</p> <p>“I didn’t want to make my situation a blockade to any deal, despite my unfair condemnation and judicial proceedings. I therefore accepted that my dossier would be handled by the bishops of <span class="caps">CENCO</span>, that I trust fully,” he was hopeful.</p> <p>Moise Katumbi left the <span class="caps">DRC</span> to South Africa before he flew to Europe to seek medical treatment after inhaling tear gas fumes fired by police when he appeared before a Lubumbashi prosecutor with his supporters to answer to charges of hiring mercenaries to overthrow the government.</p> <p>The owner of TP Mazembe club thanked the president, political actors and <span class="caps">CENCO</span> for reaching the inclusive agreement that bars Kabila from remaining in office, proposes a government of national unity until the election this year among others.</p> <p>“I want also to thank the President of the Republic, who has committed not to remain in his position for a third straight mandate, as it is prohibited in our constitution. With this inclusive agreement, the President cannot attempt to modify our constitution during tha transitional period including via referendum,” he added. <blockquote class="twitter-tweet" data-lang="en"><p lang="en" dir="ltr">Here's my statement following the historical & inclusive agreement. Congrats to the <a href="https://twitter.com/hashtag/CENCO?src=hash">#CENCO</a> & thank you to all who have allowed this outcome. <a href="https://t.co/KYATtTPNzH">pic.twitter.com/KYATtTPNzH</a></p>— Moise Katumbi (@moise_katumbi) <a href="https://twitter.com/moise_katumbi/status/816324733121732608">January 3, 2017</a></blockquote> <script async src="//platform.twitter.com/widgets.js" charset="utf-8"></script></p> <p><strong><span style="color:green;"><span class="caps">SUGGESTED</span> <span class="caps">READING</span></span></strong> <a href="http://www.africanews.com/2017/01/05/drc-political-crisis-a-timeline-of-events-and-the-churchs-saviour-role/" target="_blank"><span class="caps">DRC</span> political crisis: a timeline of events and the Church’s ‘saviour’ role</a></p>

I will continue to fight towards the rise of the Rule of Law ... This is why I will be candidate for the upcoming Presidential election in 2017.