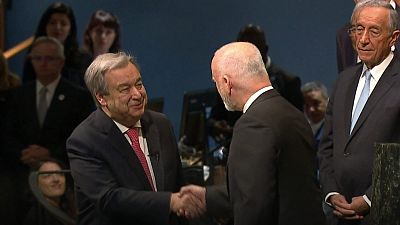 The new Secretary General of the United Nations, Antonio Guterres has called for peace to be a global priority as he started his first day in office.

The former Portuguese prime minister and UN refugee chief begins a five-year term amid conflicts in the Middle East, Africa and elsewhere, as well as threats from terrorism and climate change.

“On this New Year’s Day, I ask all of you to join me in making one shared New Year’s resolution: Let us resolve to put peace first. Let us make 2017 a year in which we all – citizens, governments, leaders – strive to overcome our differences. From solidarity and compassion in our daily lives, to dialogue and respect across political divides. From ceasefires on the battlefield, to compromise at the negotiating table to reach political solutions. Peace must be our goal and our guide,” Antonio Guterres said in his New Year’s address.

Peace must be our goal and our guide

The new chief made the appeal after taking over from Ban Ki-moon, whose term in office ended at midnight on December 31.

Guterres was sworn in on December 12 after the UN Security Council unanimously backed him for the top job.

One of the first challenges for the secretary general will be to deal with a hostile incoming new US president who has shown scorn for United Nations.

Last week Donald Trump questioned the effectiveness of the institution, describing the UN as “just a club for people to get together, talk and have a good time”.

On this New Year’s Day, I ask all of you to join me in making one shared resolution:

Let us make 2017 a year for peace. pic.twitter.com/UAnGtlfsaf