A decade after Saddam Hussein's hanging what has changed in Iraq 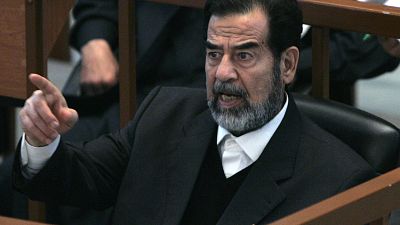 Pictures of former Iraqi President Saddam Hussein with a noose around his neck were broadcast by Iraqi national television.

He had ruled his people with an iron fist after becoming president in 1979 before being toppled by a US led invasion in 2003.

A special court sentenced the dictator to hang. One of his crimes was the massacre of Kurds in Halabja in 1988. An estimated 5000 perished when the city was bombed with chemical weapons. He was executed in December 2006. A decade on is Iraq still vulnerable?

“I would not say that the execution “per se” is the reason why the society is so vulnerable today in terms of security and also in terms of political stability. Even if Saddam Hussein had not been executed we would be today in a situation very similar to that,” Loretta Napoleoni, expert on terrorist financing told euronews.

The families of victims of Saddam Hussein’s regime and Shiites who also suffered under his rule took to the streets and danced with joy after the dictator’s hanging. The US military said it had no part in the execution.

The anger of the Sunni minority, about a quarter of the Iraqis, whose dictator came from the Shiite majority government, has fostered the emergence of the ultra-radical Islamic State, some of whom are former members of Saddam Hussein’s military.

“I also think that a large proportion of the population which is now in the Sunni triangle under the attack of various militias – Shia militia, Kurdish troops even Turkish troops – they are looking at the Islamic State in a more positive way than they would have done before.,” opined Loretta Napoleoni.

In 2011 former Prime Minister Nouri Al-Malaki who held office between 2006 and 2014 announced an initiative. One hundred days to fight corruption. It was a toothless battle.

The ‘young Iraqi democracy’ which was a dream of the American administration failed to put an end to corruption and nepotism. By 2015 Iraq was ranked 161st out of 168 in the Global Barometer of Corruption established by the NGO Transparency International.

Ten years after the execution of Saddam Hussein the country is stifled by bureaucracy, conflicts and corruption

And the offensive against the so-called Islamic State has plunged the country into seemingly permanent turmoil with an increase in the number of displaced people.