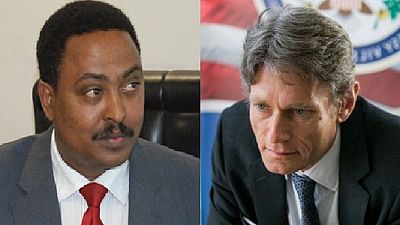 The United States (U.S.) has reiterated its position to increase dialogue with Ethiopia on issues of good governance and human rights.

A top official of the US Department of State, Tom Malinowski met with Ethiopian Foreign Minister Workneh Gebeyehu during a recent working visit to the Horn of Africa country affected by a series of anti-government protests which started over a year ago.

The meeting was under the 7th Democracy, Governance and Human Rights Bilateral Working Group which took place in the capital, Addis Ababa

The Working Group provides an opportunity for representatives of the U.S. government and the government of Ethiopia to discuss frankly the full range of governance and human rights issues.

The discussion at this Working Group addressed a broad range of issues, including:

‘‘The Working Group provides an opportunity for representatives of the U.S. government and the government of Ethiopia to discuss frankly the full range of governance and human rights issues,’‘ a statement from the Department of State noted.

Both sides welcomed the frank exchange of views during the discussion with a view to continue regularly the Working Group meetings.

The United States (US) recently renewed its travel alert for Ethiopia despite other countries such as the United Kingdom, Germany and Belgium lifting their travel bans. The US extension warned that there was still the potential for unrest in the country.

Ethiopia has since late last year been suffering from anti-government protests predominantly in the Oromo and Amhara regions, these protests have been met with heavy security clampdown. Rights campaigners have said hundreds of protesters have been killed between when the protests started till the imposition of the state of emergency.

The curfew has substantially brought peace to the country according to the Command post in charge of security. There have been reports that security forces are increasingly using repression as a tool of enforcing rules and that they were targeting opposition elements.