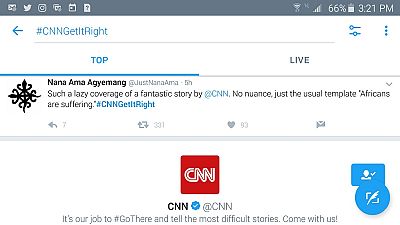 Ghanaians on Twitter have condemned a report by American television network Cable News Network (CNN) on the recently held elections, claiming Ghanaians were struggling to obtain food and services.

The article was first published on CNN website on Saturday and written by CNN reporters in Lagos and Atlanta with the headline – Ghana election: Incumbent concedes to Nana Akufo-Addo.

The main area of contention in the article, among others, was a paragraph that said Ghanaians (which was misspelled) were struggling to obtain food and services.

“Oil reserves were discovered off the coast of Ghana in 2007, but Ghanians (sic) struggle to obtain food and day-to-day services. Rolling blackouts are common and citizens often stand in long line to obtain products,” it said.

A cross section of Ghanaians including media personalities on Sunday morning began tweeting their displeasure with a screenshot of the paragraph in question and hashtag #CNNGetItRight.

A Ghanaian sports journalist, Gary Al-Smith, started the hashtag which is now the top trend in the West African country as hundreds of Ghanaians condemn the misrepresentation.

“Also, @CNN, Ghana and Venezuela are not twins. In fact, Ghana are North Korea are not even close. Lazy armchair reporting. #CNNGetItRight,” Al-Smith tweeted after he advised: “At least, spellchecker on the PC of whoever wrote this should have pointed out the word ‘Ghanaians’ and NOT ‘Ghanians’. #CNNGetItRight.”

The original article was later updated at 1255 GMT with the correct spelling of Ghanaians.

The entire paragraph was deleted at 1501 GMT with an Editor’s Note acknowledging the mistakes.

“An earlier version of this article incorrectly described the status of the retail economy in Ghana. Stores are generally well stocked, and food shortages are rare. The earlier version also erroneously said Nana Akufo-Addo ran for president in 1998. Ghana did not have presidential elections in 1998,” the note stated.

Uhm CNN, I didn't know Ghanaians "stand in long lines to obtain products" or "struggle to obtain food". And I live there. #CNNGetItRight pic.twitter.com/tpyosBIrJJ

At least, spellchecker on the PC of whoever wrote this should have pointed out the word 'Ghanaians' and NOT 'Ghanians'. #CNNGetItRight pic.twitter.com/C4c0m8wDRB

pls where in 1998 did nana addo run for president. so many factual inaccuracies. CNNPolitics #CNNGetItRight https://t.co/rLUyeqWMOA

Ghana Twitter makes me proud of our future most times … If you're gonna represent us, represent us right or not at all … #CNNGetItRight

Er… Good Morning CNN. Your journalist is either incompetent or racist. I see no third option. Either way, fire them! #CNNGetItRight https://t.co/jZuZyQTm3N

#CNNGetItRight
They are disappointed our elections were so smooth that they had nothing sensationally damaging to report. Naniama people

That moment when CNN messes with Ghanaians. At least we won't have to beg for data to tell #CNNGetItRight

Dear CNN , queuing to go buy waakye no mean say we are poor ooo..it is the love we have for the waakye brand#CNNGetItRight pic.twitter.com/iFlC97bbbd

Your country protests elections results and organise demonstrations. We go to church and jam with our opponent's song #CNNGetItRight

CNN, Ghanaians are not struggling to obtain food. We are not standing in long lines to obtain products. I know. I live here#CNNGetItRight pic.twitter.com/iEmdLYnpnI

Such a lazy coverage of a fantastic story by CNN. No nuance, just the usual template "Africans are suffering."#CNNGetItRight

I can't recognise my country from the 2nd paragraph #CNNgetItRight pic.twitter.com/tCXeyTMx2n