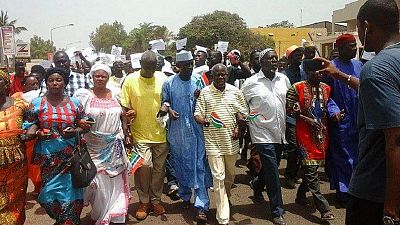 <p>Gambian authorities have freed main opposition United Democratic Party (<span class="caps">UDP</span>) leader, Ousainou Darboe and 18 other opposition members sentenced to three years in prison in July.</p> <p>Their release comes days after the election of Adama Barrow ending the 22-year rule of Yahya Jammeh.</p> <p>They were released on bail by an appeals court after a hearing on Monday afternoon, and are expected to be fully acquitted as part of President-elect Barrow’s promise of releasing all political prisoners.</p> <p>The released opposition members who were jailed by the High Court in Banjul for unlawful assembly, incitement to violence and conspiracy, were arrested after a demonstration in April calling for political reforms and to protest against the death of an official of the <span class="caps">UDP</span> in custody. </p> <p>The national organizing secretary of the <span class="caps">UDP</span>, Solo Sandeng, was arrested after the April 14 demonstration and died while in detention. His death sparked the April 16 demonstration which resulted in more arrests including that of the leader of the <span class="caps">UDP</span>, Ousainou Darboe.</p> <p>Human rights organisation Amnesty International welcomed their release and called for the release of other prisoners of conscience.</p> <p>“We must also not forget other prisoners of conscience who still languish in jail simply for having expressed their opinion or participated in peaceful protests. These include three Imams arrested by the security forces over a year ago and not seen since. Their only ‘crime’ – presenting a petition to the government,” said Amnesty International’s West Africa Anglophone Researcher Sabrina Mahtani.</p> <p>51-year-old Adama Barrow was the flagbearer of the <span class="caps">UDP</span> before he was elected to represent a seven party opposition coalition to unseat Yahya Jammeh. </p> <p>Barrow received the blessing of party founder Ousainou Darboe who was in prison at the time of his election to lead the party. <blockquote class="twitter-video" data-lang="en"><p lang="en" dir="ltr"><a href="https://twitter.com/hashtag/GambiaDecides?src=hash">#GambiaDecides</a> “Just From Prison” banner held by nonpartisan citizens once court announced oppo leader Darboe & co release on bail <a href="https://twitter.com/hashtag/kebetu?src=hash">#kebetu</a> <a href="https://t.co/AbXpfp0Bh3">pic.twitter.com/AbXpfp0Bh3</a></p>— Aisha Dabo™ (@mashanubian) <a href="https://twitter.com/mashanubian/status/805836901097803776">December 5, 2016</a></blockquote> <script async src="//platform.twitter.com/widgets.js" charset="utf-8"></script></p>