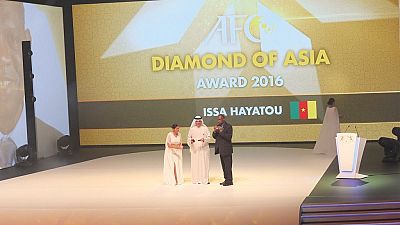 Confederation of African Football President, Issa Hayatou, has been decorated with the 2016 Diamond of Asia Award, one of the prestigious honours bestowed by the Asian Football Confederation (AFC).

He was decorated on the night of the AFC Awards on Thursday, 1 December 2016 at the Emirates Palace in Abu Dhabi, the capital of the United Arab Emirates (UAE).

The annual award is given to an individual who has made an outstanding contribution to the development and promotion of football, on and off the pitch.

The AFC said the choice of the CAF boss was because of his vast experience and also as an individual whose “wise and timely advice has always been a decisive contribution for all those who have worked with him at the level of FIFA”.

AFC particularly lauded Hayatou for his leadership as president and how he masterfully led the finalization and adoption of reforms at the level of the FIFA between October 2015 and February 2016.

The AFC President, Sheikh Salman Bin Ebrahim Al-Khalifa, also highlighted the continuous support the CAF president has always given to Asian football before presenting him with the prestigious distinction.

“Africa and Asia have similarities and face the same challenges. I am convinced that together, if we continue to speak with one voice, we can have transformations in the field, and we can look to the future with confidence and optimism,” Hayatou noted in a statement of thanks.

He thanked the dignitaries present, among others; members of the UAE Government, members of the AFC Executive Committee, UEFA and the presidents of the federations that make up the AFC.

The event was primarily to honour the best footballers on the continent. It is the same as the African football gala CAF holds each year to award the best players, coaches and teams on the continent at the club and country levels.

#AFCAwards2016 dazzles as Asia’s finest are honoured in a grand ceremony in Abu Dhabi.