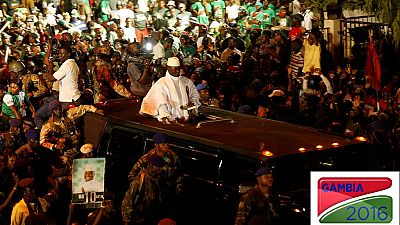 Gambia’s incumbent president Yahya Jammeh who is a candidate in the country’s December 1 presidential elections said on Tuesday that demonstrations will not be allowed after the elections.

“There is no reason to protest because the election cannot be rigged, and in this country, anyway, we do not allow demonstrations,” he said on the last day of campaigning that saw thousands rally behind opposition leader Adama Barrow.

“Nothing will happen, this is not the first time we organized elections,” Jammeh told thousands of his supporters in Banjul.

There is no reason to protest because the election cannot be rigged, and in this country, anyway, we do not allow demonstrations.

“They (the opposition) will not win,” he added.

The main opposition leader elected by seven opposition party coalition, Adama Barrow, has urged President Jammeh to be calm when he loses the election.

Adama Barrow and Mamma Kandeh, the third candidate, campaigned hard to win the votes of 886,578 electorates at 1,422 polling stations in 53 constituencies in the seven administrative regions of the country.

The winner of the election will enjoy a five-year term as president.

The small West African nation with less than two million people will also hold legislative and local elections in April 2017 and April 2018 respectively.