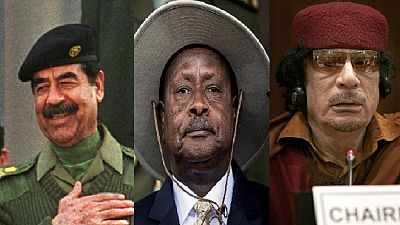 Ugandan President, Yoweri Kaguta Museveni, has said the United States (US) and European Union (EU) had no business invading Libya and Iraq. According to him, that action is partly responsible for the current migrant crisis that Europe is facing.

He described as ‘unjust and wrong,’ the ouster of the then Iraqi leader, Saddam Hussein and his Libyan counterpart, Muammar Gaddafi. He said the only US war that is justified post 9/11 was the war to displace al Qaeda from Afghanistan.

‘‘In the last 16 years, since the attack on the twin-towers, in New York in the year 2001, the USA and the other western countries have attacked Afghanistan, Iraq and Libya.  Of these wars by the West against Independent and Sovereign States, two were clearly wars of aggression; they were unjust wars,’‘ he said.

I needed no lectures on the positive and negative points of Gaddafi. However, to allow the former colonial countries to attack any portion of Africa without a response from us, was betrayal.

He cited how supposed weapons of mass destruction were never found in Iraq, even though they were the basis on which the invasion of the country was carried out. Whiles stating that Gaddafi was not an angel, he said Africa literally betrayed the slain leader by sitting back and allowing the invasion of the north African country.

‘‘The present African leaders are, however, also co-guilty in this matter. We should never have allowed external powers to attack any part of the African soil without our permission. I had fought Gaddafi two times: 1972 and 1979.

‘‘I needed no lectures on the positive and negative points of Gaddafi.  However, to allow the former colonial countries to attack any portion of Africa without a response from us, was betrayal.  To be fair to the African leaders, one could say that we were taken by surprise.

He said, he was personally shocked at the attack on Libya whiles Africa sat back and did nothing, ‘‘Even me, I did not believe that Western leaders could be so reckless as to do what they did in Libya.’‘ He charged African leaders to resist a ‘repeat of Libya’ in the future.

He also gave perspectives on western politics in the wake of what he says are ‘‘events in the USA, Britain and Hungary in recent times because they are somehow connected with Africa and the Middle East.’‘

In a ‘missive’ titled, ‘Casualties of Western ‘Neo-Imperialism’ and African Weakness,’ Museveni gave his views on the political careers of David Cameron and Hillary Clinton vis-a-vis the Brexit vote and the just ended presidential election of the United States.

Whiles referring to the former US secretary of State as a friend, Museveni said the US electoral system where Hillary won the popular votes but still lost the polls had to be respected.

‘‘In the month of June, our friend David Cameron suffered a defeat in the UK in a Referendum as to whether to remain in the EU or not.

‘‘In the month of October, the Government of Hungary called a Referendum against immigration to the chagrin of elements of the elite in Europe where the voters rejected the refugee policy of the EU and, recently, Mr. Trump won the election in the USA against our longtime friend, Hillary Clinton.

‘‘Although Hillary won the popular vote, Mr. Trump won the Electoral College vote.  That is their system which we must respect,’‘ he added.