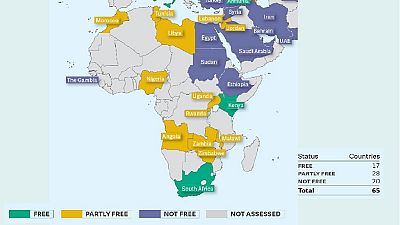 According to a recent research on the use of the internet, online freedom around the world has declined for the sixth consecutive year.

Governments are increasingly going after messaging applications like WhatsApp and Telegram, which can spread information quickly and securely.

On the global scale, of the 65 countries, 17 were classified ‘Free’, 28 were ‘Partly Free’ and the remaining twenty were classed ‘Not Free.’ Four African countries made it to that rank.

An closer look at Africa’s candidates.

The findings indicated the following

All four countries considered ‘Not Free’ had internet penetration of between 12 and 36%. Only Sudan did not block social media and other political and social content. But all the others did that and also conducted arrests of bloggers and internet users.

Ethiopia is currently under a state of emergency with some of the rules being a restriction on access to social media. Anti government protests in the country are believed to have been largely instigated via social media.

Egypt, one of the countries that was hit by the recent Arab Spring has had rights groups accuse it of infringement on the rights of people.

The Gambia is notorious in human rights circles, with its leader, Yahya Jammeh being accused repeatedly of repression of the media and of opponents. The country heads to the polls in about a fortnight.

Sudan unlike Ethiopia, Egypt and The Gambia did not necessarily put restrictions on internet use but reportedly rounded up people for what the authorities see as abuse of the internet.

Other key findings of the research noted that: