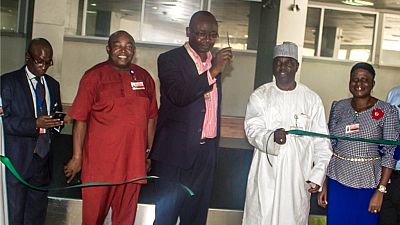 <p>In a bid to conform with global trends and International best practices in the aviation sector, the Federal Airports Authority of Nigeria (<span class="caps">FAAN</span>) recently commissioned 3 ultra-modern carousels and conveyor belts at the arrival hall of the Murtala Muhammed International Airport.</p> <p>In a press statement signed by the Ag. General Manager, Corporate Affairs, <span class="caps">FAAN</span> Henrietta Yakubu, the commissioning of the facilities will reduce delays and fast track departure formalities of arriving passengers.</p> <p>The facility is one of many projects embarked by the government to facilitate passengers facilitation at the airports, keep pace with the growing traffic which has been on the increase since the commencement of the remodeling project, and the immense growth of the country as the fastest growing economy in Africa.</p> <p>The timing of the world class facility is in consonance with the Authority’s readiness to thrill her esteem airport users with a fascinating travel experience especially with the approaching festive season usually associated with increased inbound passengers and luggage.</p> <blockquote class="twitter-tweet" data-lang="en"><p lang="en" dir="ltr"><span class="caps">FAAN</span> commissions new carousels at Lagos Airport <a href="https://t.co/AYjF8Mr6es">https://t.co/AYjF8Mr6es</a></p>— Infotrust (@Infotrustng) <a href="https://twitter.com/Infotrustng/status/798874412665700352">November 16, 2016</a></blockquote> <script async src="//platform.twitter.com/widgets.js" charset="utf-8"></script> <p>The Authority assures all airport users of improved quality services in line with global best practices as they are not unmindful of the need to provide world class facilities in spite of the economic challenges facing the country.</p>