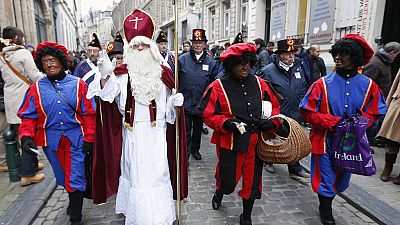 <p>Controversial sidekick of the Dutch Saint Nicholas, Black Pete, has returned in the town of Maassluis, near Rotterdam, on Saturday provoking an anti-racism protest leading to the arrest of about 100 protesters.</p> <p>Black Pete (Zwarte Piet), according to Dutch folklore, is a Moor who originates from Spain and helps St. Nicholas as he decides which children have been well-behaved enough to receive presents. </p> <p>He is recognized by a black face, Afro hair and large red lips widely condemned as racist especially when white people play that role in parades for children.</p> <p>Dutch police told <span class="caps">AFP</span> that they arrested about 100 protesters because demonstrations were banned on that day.</p> <p>“We arrested about 100 people who were demonstrating in Rotterdam, where the protests were banned for the day,” local police spokeswoman Lillian van Duijvenbode told <span class="caps">AFP</span>.</p> <p>“We asked them to stop their demonstration at three different places in town, but they refused,” she added, saying possible legal action would be decided on a case-by-case basis.</p> <p>Every year, the controversy surrounding Black Pete rises and in 2014, a UN working group released finding from a probe which concluded that Black Pete is indeed a racist figure. <blockquote class="twitter-tweet" data-lang="en"><p lang="en" dir="ltr">You know there's a huge problem in The Netherlands when the police are allowed to dress in blackface. <a href="https://twitter.com/hashtag/dutch?src=hash">#dutch</a> <a href="https://twitter.com/hashtag/blackpete?src=hash">#blackpete</a> <a href="https://twitter.com/hashtag/racisttradition?src=hash">#racisttradition</a> <a href="https://t.co/9uB8lCXF7Z">pic.twitter.com/9uB8lCXF7Z</a></p>— Look Ceighe (@seanjohn1972) <a href="https://twitter.com/seanjohn1972/status/797512824180314113">November 12, 2016</a></blockquote> <script async src="//platform.twitter.com/widgets.js" charset="utf-8"></script></p> <p>Following the UN findings, an Amsterdam court ruled that Black Pete is a ‘negative stereotype’ and encouraged many to try to change the deeply rooted custom.</p> <p>However, many people in the Netherlands do not want to see the national tradition changed as around 20 far-right activists came out as counter-protesters, Germany’s public broadcaster Deutsche Welle reports. <blockquote class="twitter-tweet" data-lang="en"><p lang="en" dir="ltr">Today the Dutchies welcome Sinterklaas. And despite the discussions around “black Pete” I love this image and the tradition it stands for! <a href="https://t.co/3eL3v2zUj7">pic.twitter.com/3eL3v2zUj7</a></p>— Henriette Kloots (@henriettekloots) <a href="https://twitter.com/henriettekloots/status/797395811973922816">November 12, 2016</a></blockquote> <script async src="//platform.twitter.com/widgets.js" charset="utf-8"></script></p> <p>The event on Saturday attracted an estimated 20,000 visitors gathered to welcome the arrival of Saint Nicholas (Santa Claus) and his companions from Spain by boat to mark the beginning of the Christmas season. <blockquote class="twitter-tweet" data-lang="en"><p lang="en" dir="ltr"><span class="caps">QUICK</span> <span class="caps">OVERVIEW</span>: <br /> St. Nick arrives by boat from Spain in November with his friends Black Pete <a href="https://t.co/cRLyRHY3Lg">pic.twitter.com/cRLyRHY3Lg</a></p>— līa (@liabellis) <a href="https://twitter.com/liabellis/status/797713135897485312">November 13, 2016</a></blockquote> <script async src="//platform.twitter.com/widgets.js" charset="utf-8"></script></p> <p>They will distribute sweets and presents to children on the eve of December 5.</p> <p>The traditional festivities for Saint Nicholas dates back to the 16th century, with the first appearance of Black Pete in an 1850s children’s book.</p> 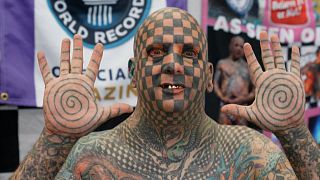