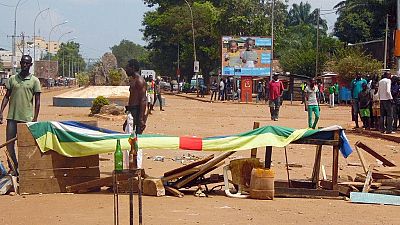 <h3>It is not yet business as usual in the Muslim neighbourhood of PK5 in Bangui, Central African Republic’s capital. It is here where members of the Muslim Seleka rebel group live, and residents and business people still live in fear after the most recent clashes in late October. The rebel sect has been held responsible over large-scale abuses perpetrated after their seizure of power in early 2013 following the overthrow of President François Bozizé, a Christian.</h3> <p>The overthrow led to the formation of a counter pro-Christian rebel group know as the “anti-balaka”, plunging the country into a spiral of inter-communal killings. But these rebels today claim to be a self-defense group, because the state has neglected the Muslim population. </p> <p>“We are not the jihadists, we are not the Boko Haram people thought, we are the Muslim populations who defend our Muslim community throughout the territory of the Central African Republic,” proclaims a militia leader surrounded by armed men.</p> <p>Hassan Ben Seid, the secretary-general of the PK5 traders’ association says that these armed factions represent a “necessary evil”. He says: “It is the parents … the Muslim children who are organizing to try to protect the Kilometer 5 and their families.”</p> <p>In efforts to bring peace among the two religions, Christian leaders and the Imam regularly organise peace marches to the PK5. </p> <p>From its usual name, the neighborhood is called “Kilometer 5” or “PK5” because it is five kilometers from the city center, a small distance that Muslims do not travel anymore for fear of being the target of attacks if they leave their enclave – not to mention those who fled to PK5 after fleeing from other quarters.</p> <p>“We are blocked, but we are surrounded by the United Nations Mission (<span class="caps">MINUSCA</span>), but we do not have any protections for us, we have not had access to the Muslim cemetery on the other side of the airport for a month now. The university, “Ben Seid says.</p>