20 Congolese students injured in clashes with Kinshasa police during protest 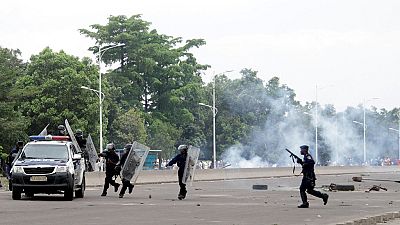 Twenty students were injured in clashes with Congolese police during a demonstration on Wednesday in Kinshasa against an increase in exchange rates for payment of university fees.

“We received 23 injured students, including five who were transferred to the Kokolo camp military hospital due to gunshot wounds,” a doctor on duty at the medical center of the Higher Institute of Applied Technology (ISTA) where the clashes took place told AFP.

When asked by the press about cases of gunshot wounds, General Célestin Kanyama, head of the Kinshasa police denied saying “the police used nothing but non-lethal weapons.”

“We are demonstrating against the increase in exchange rates for fees decided by the academic authorities,” Vice President of the ISTA Student Committee, Makonzo Patrick, told AFP.

According to the students, the exchange rate for the registration fee of $300 has been raised from 967 francs to 1,122 Congolese francs.

At midday, the Director General of ISTA, Kasengedia Mutumbe, announced the downward revision of the exchange rate.

“In the name of social peace at ISTA, we have lowered the rate to 967 Congolese francs to the US dollar,” he told AFP.

AFP reports that more than a hundred Congolese police had surrounded the university premises in the morning and fired tear gas to classrooms.

Two vehicles were burned while several shops were damaged.

Later in the day, the Minister of Higher and University Education, Théophile Mbemba, decided to suspend Kasengedia Mutumbe from office “for investigative reasons,” according to a statement released Wednesday night on state television.

On Wednesday night, about twenty police officers remained on guard near the campus.

The violence occurred at a time when the country is facing a tensed climate.