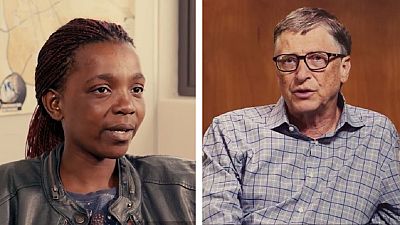 Barely a month after celebrating successes in the fight against malaria in sub Saharan Africa, the world’s richest man, Bill Gates on Wednesday shared the story of a South African tuberculosis (TB) patient as parts of efforts in fighting the disease.

‘‘Last year, Simbongile, a young mother living outside of Cape Town, learned she was infected with tuberculosis. Her story is heartbreaking,’‘ Gates wrote as an introduction to a three minutes 22 seconds video.

The video titled ‘Surviving Tuberculosis,’ starts with Gates talking about the fact that Tuberculosis killed more people than AIDS. He adds that AIDS affects a persons immune system but it was TB that actually killed people with AIDS.

‘‘To really help people with HIV, we either need to prevent them from getting tuberculosis of treat the TB that they have,’‘ Gates said.

The story of Simbogile Xesha

Simbogile lives in Cape Town specifically Khayelistsha. She learnt of her HIV positive status at the age of 18. She tells how devastated she was when she got to know.

She admits that with a boyfriend who had TB and who she helped cater for, when the symptoms of TB popped up however she thought she had only TB. But she broke up with him knowing that she had XDR-TB.

Extensivley drug resistant TB or XDR-TB is resistant to both the two common antibiotics and the next set of anti-TB drugs.

She speaks about the the exhaustion of suffering for over six months and having to take 22 tablets on a daily basis, without fail – Monday to Sunday. She weeps at the thought of having to stay alive because others depended on her – kids, family etc.

According to the video, Simbongile was evetually given a TB drug called bedaquiline and her situation is now under control. A new drug regime called NIX-TB is being tested in Caper Town.

‘‘A universal drug regimen for TB could be a game-changer for controlling the disease,’‘ the video concluded.

In an earlier Facebook post, Gates wrote about how his visit to South Africa earlier this year taught him that to effectively combat HIV/AIDS, there was the need to ‘attack’ and defeat Tuberculosis.

‘‘I visited South Africa earlier this year to learn more about the progress the country is making in the fight against HIV. Again and again, my conversations with doctors, researchers, and patients turned to HIV’s lethal partner: tuberculosis,’‘ his post read.