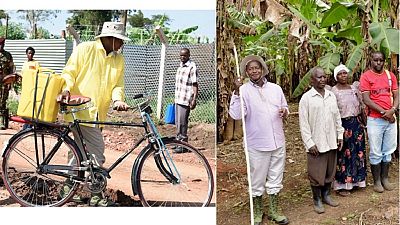 Ugandan President Yoweri Museveni has engaged actively in his Operation Wealth Creation campaign by spending four days at his farm and teaching locals how to kick out poverty through agriculture.

The 72-year-old president started his third day (Monday) at Luweero district in the Central Region of Uganda by walking for about a kilometer with a bicycle carrying gallons to fetch water “in a drip irrigation demonstration”.

It's Day Three of my Operation Wealth Creation drive in Luweero. Began the day fetching water for use in a drip irrigation demonstration. pic.twitter.com/Otmku5WkSn

“With changing weather patterns and unreliable rainfall, farmers must do more irrigation. Like I demonstrated, it should not be expensive,” he tweeted with pictures of him helping a farmer to plant a crop.

With changing weather patterns and unreliable rainfall, farmers must do more irrigation. Like I demonstrated, it should not be expensive. pic.twitter.com/rckX30AgW8

Earlier this month, Museveni blamed locals in the district of being poor by choice because of the fallow land in their possession.

He was given 10 acres of land after a request to cultivate coffee, tea, food crops, fruits and also to rear animals on an acre each as part of the programme.

It was nostalgic as I met families (late Lule & Zakayo Kalibala) that supported our Bush struggle. Lule kept drugs for our fighters. pic.twitter.com/N7P06Xpi3F