Aoun, who is in his 80s, secured the presidency by winning the support of 83 MPs, well above the absolute majority of 65 needed to win, according to a tally of votes read out in a televised broadcast from parliament.

The Lebanese presidency is reserved for a Maronite Christian in the country’s sectarian power-sharing system.

After taking oath, Aoun said that any solution to the war in neighbouring Syria must guarantee the return of Syrian refugees in Lebanon. Lebanese officials say the refugees number 1.5 million.

Hariri’s decision to endorse Aoun marked a major political concession, reflecting the diminished role of Saudi Arabia in Lebanon, and the decisive influence wielded by the Tehran-backed Hezbollah. Saudi Arabia had backed Hariri and his allies through years of political struggle with Hezbollah and its allies.

Hariri’s own financial misfortunes have also played a big part in bringing about the breakthrough. His political network in Lebanon was hit by a cash crunch caused by financial troubles at his Saudi-based construction firm, Saudi Oger.

Aoun is due to meet lawmakers this week on their preferences for prime minister. He is obliged to designate the candidate with the greatest support among MPs, expected to be Hariri. 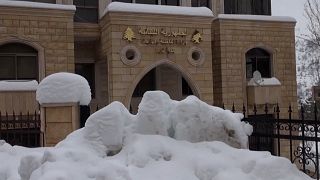