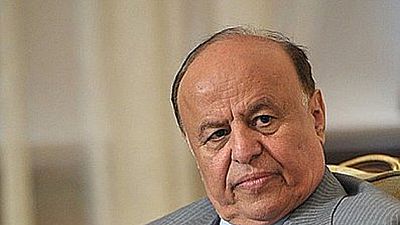 Hadi who is exiled in Saudi Arabia, was firm in his dismissal of the proposal, which would give the Shi’ite Houthi rebels who seized the capital in 2014 a share in the future government.

According to Hadi, the latest peace proposal by the UN to end the turmoil in Yemen would only be a path to more war and destruction as it “legitimises the Houthi coup”.

Speaking after a meeting with UN envoy Ismail Ould Cheickh Ahmed in Riyadh, Hadi said the agreement would “reward the rebels and penalise the Yemeni people and legitimacy,” the pro-government Saba news agency reported.

According to a copy of the proposal seen by the Reuters news agency, the plan would sideline Hadi and set up a government of less divisive figures.

The deal reports say would involve removing Hadi’s powerful vice president, Ali Mushin al-Ahmar Ahmar from power and Hadi agreeing to become little more than a figurehead after a Houthi withdrawal from the capital Sanaa.

Hadi’s rejection of the plan thus deals a fresh blow to efforts by the UN to end a conflict that, in just over a year and a half has left 7,000 people dead, three million displaced and the country divided.

At least 17 civilians were reportedly killed on Saturday in the province of Taiz, in an air strike on a residential area by the Saudi-led coalition, local officials and residents said.

“All those in the houses were killed,” he told AFP news agency, adding a child and seven women were among the dead.

The Saudi-led coalition has been fighting the Houthi rebels and forces loyal to former president Ali Abdullah Saleh, who hold much of the north of Yemen including the capital Sanaa, since March 2015 to try to restore Hadi to power.