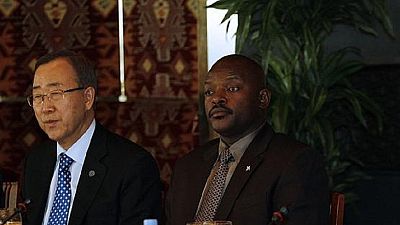 Burundi said on Wednesday that it has officially notified the United Nations (UN) of its decision to quit the International Criminal Court (ICC). They are the second African country behind South Africa to present their withdrawal notice to the UN.

Even though the UN has yet to confirm receipt of the notice sent to Secretary-General Ban Ki-moon, a Burundian official told Reuters that the document had been formally submitted.

Another ministry source said the withdrawal document was dated Oct. 19, a day after President Pierre Nkurunziza signed a decree to that effect. He signed after the parliament okayed a cabinet position to exit the body.

A presidential spokesperson on media, Willy Nyamitwe also hinted on twitter that a government delegation was sent to New York purposefully to serve notice of the withdrawal.

Dear Daniel_Finnan, thank you for your question. A BurundiGov Delegation to UN is expected to be in New York today. #Burundi https://t.co/AV83sJDMPk

Beside Burundi and South Africa, the Gambia said on Tuesday that it would withdraw, blaming the court of bias against Africans.

South Africa’s letter informing the U.N. chief of its decision to withdraw was also dated Oct. 19. They argued that the ICC’s Rome Statutes were at odds with its laws granting leaders diplomatic immunity.

Burundi lawmaker Gabriel Ntisezerana said this month when parliament voted to quit the ICC that the court was “a political tool used by powers to remove whoever they want from power on the African continent.”

The ICC said in April it would investigate outbreaks of violence in Burundi, which has been mired in a political crisis for more than a year. The United Nations, Western powers and rights groups have criticised the government for the way it has handled the unrest and have accused it of rights abuses. The government denies this.