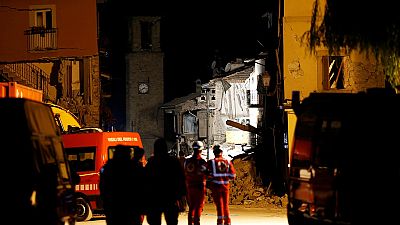 <p>A series of strong earthquakes hit central Italy on Wednesday, striking fear among residents still rattled by a deadly tremor in August, but there were no reports of casualties.</p> <p>A quake measured at 6.0 magnitude by the U.S. Geological Survey struck about two hours after a first quake measuring 5.4 struck.</p> <p>Both were strong enough to be felt more than 150 km south in Rome, where lamps swayed on the upper floors of building.</p> <p>The epicentres of both quakes were near the town of Castelsantangelo sul Nera in the Marche region.</p> <p>First reports indicated that some old buildings collapsed but that the damage would not approach that caused by the major quake that struck the Marche, Lazio and Umbria regions on Aug 24, which devastated several towns and killed nearly 300 people.</p> <p>Officials in the town of Visso, not far from the epicentre, reported several injuries. Several old rural churches collapsed or were damaged. Schools were ordered closed on Thursday.</p> <p>The U.S. Geological Survey initially attributed a magnitude of 5.6 to the first quake and 6.4 to the second, before revising them lower. <span class="caps">USGS</span> said the epicentre was at a depth of about 10 km (6 miles).</p> <p>Electrical power was lost in some of the areas and some roads were closed.</p> <p>Mauro Falucci, mayor of Castelsantangelo sul Nera, said there was no electricity and people in the town of about 300 residents has gathered in a town square.</p> <p>Italian Prime Minister Matteo Renzi cancelled engagements to follow developments.</p> <p>Wednesday’s earthquake caused further damage to already precarious structures in Amatrice, the town worst hit by the 6.2-magnitude tremor in August, officials said, but there were no injuries.</p>