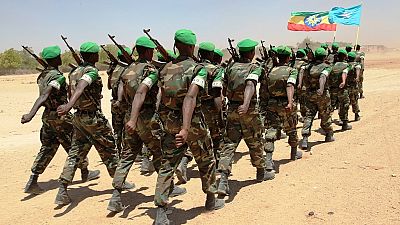 <p>Ethiopia has stated that its decision to pull out troops from Somalia is not linked to the state of emergency declared in the country that has faced months of anti-government protests.</p> <p>Communication minister Getachew Reda explained at a news conference in the capital Addis Ababa on Wednesday that their decision was due to limited support in the fight against Al Shabaab which creates a financial burden.</p> <p>“The troops are not under the <span class="caps">AMISOM</span> mandate and are unfortunately not supported in their efforts to assist the Somali National Army … The Somali National Army and the international community must take responsibility,” Reda said.</p> <p>He also noted that the withdrawal does not affect the 4,400 Ethiopian contingent operating under the African Union Mission in Somalia (Amisom) but only “a few thousands financially supported by Ethiopia.”</p> <p>Ethiopian troops withdrew from key towns in Somalia’s Hiran province which were formerly the stronghold of jihadists Al Shabaab.</p> <p>The troops pulled out from the city of Tiyeeglow on Wednesday and the Islamists announced immediately that they had taken control of the town as they did in Moqokori, El-Ali and Halgan in the past week.</p> <p>Ethiopia has imposed a six-month state of emergency to control anti-government protests in the Oromo and Amhara regions.</p>