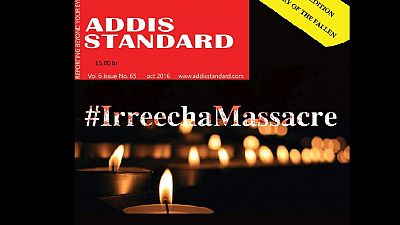 Publishers of one of Ethiopia’s most influential magazines, the Addis Standard, have announced the termination of its print version due to restrictions of the October 8 state of emergency.

According to Jakenn Publishing, ‘‘in the wake of Ethiopia’s recently introduced State of Emergency, sustaining the regular monthly publication of the magazine has become impossible.

‘‘It is therefore with a sense of unease that the management announces the indefinite suspension of the print edition as of October 2016,’‘ their statement read.

Announcing the indefinite termination of AS PRINT edition. We are deeply saddened, but we remain determined for more on the DIGITAL version pic.twitter.com/TtPWVZLMiJ

The publishers revealed that the decision to terminate the print edition was also because printers had turned down the production of their last edition which was dedicated to the Irreecha stampede. It was the stampede that renewed anti-government protests leading to the imposition of a state of emergency.

On October 7, a day before the state of emergency was announced, the Addis Standard posted on twitter that its October edition was going to be a special edition dedicated to what they said was the ‘‘Irreecha massacre.’‘

Established in February 2011, this edition was its 65th publication. They hinted on twitter that with their print version on suspension, they were going to increase their online presence as a means of continually informing the public about ongoings in the country.

AS decided to terminate its print edition after printers turned down this very copy following #Ethiopia's announcement of #StateOfEmergency https://t.co/VMlYYkxBJU

Ethiopian opposition groups and other western diplomats in the country have decried the the government’s decision to impose the state of emergency. The move has been described as a measure to continue with increased repression of opponents.

The government however blames the violence on “anti-peace forces” and “foreign enemies,” specifically mentioning Egypt and Eritrea.Egyptian president Al Sisi denied any involvement in the protests.