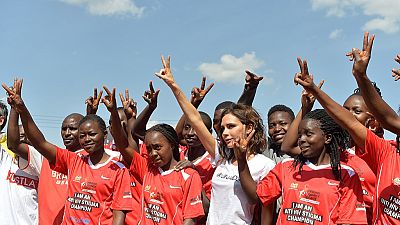 She arrived in the east African country with her eldest son, Brooklyn on Thursday and departed on Saturday. The visit was under the aegis of Kenya’s Health Ministry in collaboration with ‘Born Free Africa’ and UNAIDS to raise awareness about HIV.

Focus of the visit

Ending AIDS can happen, but will only happen if we join together and end all forms of stigma and discrimination.

The Beckhams travelled across Kenya and visited projects that aim to reduce the effects of HIV in the country. They met with community and health workers to understand the challenges they face in their work and learned about their many successes.

They also spent time with children and talked to young people and adults living with or affected by HIV, hearing first-hand their personal stories and experiences of HIV.

“We have come such a long way together to overcome AIDS—we know the facts, we have the tools, but we need commitment, action and funding to see this through! Ending AIDS can happen, but will only happen if we join together and end all forms of stigma and discrimination,” the former Spice Girl stated.

Hanging out with teenagers in Kenya. Get tested, know your status, get treatment. NO STIGMA! UNAIDS brooklynbeckham X VB pic.twitter.com/gMP2VzLlzR

The pair also took part in a national football campaign “Maisha kick out HIV stigma”, which aims to motivate young people to get HIV tested.

HIV testing, prevention and treatment services are critical to ending the AIDS epidemic, but often people, in particular young people, do not access services owing to lack of information and the stigma and discrimination linked to HIV.

UNAIDS Country Director, Jantine Jacobi also said, “Having the support of our International Goodwill Ambassador is extremely important for Kenya in moving towards ending the AIDS epidemic as a public health threat.”