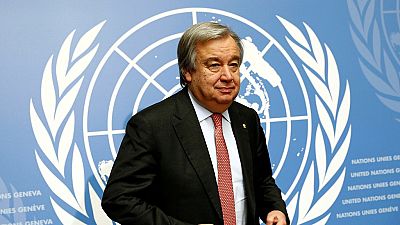 Former Portuguese Prime Minister, Antonio Guterres, is in line to become the next United Nations Secretary-General. Guterres will take over from Ban Ki-moon, whose second term in office ends this year.

The United Nations is expected to make a formal announcement of the new chief soon. According to diplomats, Guterres’ appointment is all but certain because none of the five U.N. Security Council veto-powers voted against him in a sixth secret ballot on Wednesday (October 5).

The 15-member Security Council cast secret ballots for each of the 10 candidates with a range of three choices of: encourage, discourage or no opinion.

For Guterres to be formally recommended to the 193-member General Assembly for election, the Security Council still needs to adopt a resolution behind closed doors. The resolution needs at least nine votes in favor and no vetoes to pass.

Full name, Antonio Manuel de Oliveira Guterres, was born 30 April 1949, he served as Prime Minister of Portugal from 1995 to 2002. He also served for a time as President of the Socialist International.

He has previous work experience with the UN having served as United Nations High Commissioner for Refugees from June 2005 to December 2015. His appointment is seen as apt at a time the world is battling with a refugee crisis.

His appointment also put to rest thye idea that it was time for the UN to allow a woman to ascend to the high office of Secretary General.