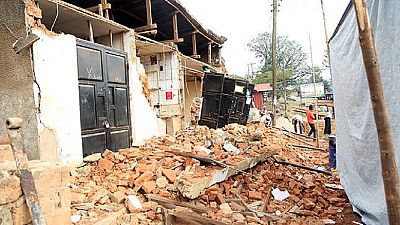 <p>President John Pombe Magufuli has disclosed on Thursday that the UK government has donated 6 billion shillings (over $2.7m) for earthquake survivors in the Kagera region, the Citizen news portal reports. </p> <p>The Kagera region located in the country’s northwest was the worst hit by the September 10 earthquake that claimed 19 lives and destroyed properties and rendered thousands homeless.</p> <p>Kenyan president in expressing his condolences to Tanzania weeks back, pledged material assistance comprising iron sheets, blankets and mattresses to assist victims. For his part, Ugandan president also donated a cash sum of $200,000 to victims. Burundi also gave some 183 tonnes of foodstuffs.</p> <blockquote class="twitter-tweet" data-lang="en"><p lang="en" dir="ltr">Aid needed for Tanzania quake survivors, Museveni donates $200,000<a href="https://t.co/j8jRyzGt6T">https://t.co/j8jRyzGt6T</a></p>— africanews (@africanews) <a href="https://twitter.com/africanews/status/777550343605551105">September 18, 2016</a></blockquote> <script async src="//platform.twitter.com/widgets.js" charset="utf-8"></script> <p>Meanwhile, president Magufuli has sacked two officials for reportedly operating fake fundraising accounts in respect of the victims. </p> <p>A statement from the presidency said, ‘‘The president has revoked the appointment of Kagera Regional Administrative Secretary, Amantius Msole and Municipal Council Executive Director, Steven Makonda, after he learnt that the two opened a bank account which bears the same name as the one which was opened by the government.’‘</p> <p>The president has also asked the relevant security agencies to deal with the officials. He also asked citizens and institutions to continue donating by using the official account under the name, “Kamati ya Maafa Kagera.”</p> <p>Meanwhile, the Indian prime minister, Narendra Modi, through the ambassador to Tanzania also donated 545 million shillings (about $250,000). The government held a fundraising dinner three days after the quake and realized an amount of over $640,000.</p>