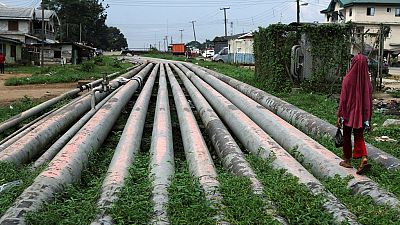 Nigeria’s crude-oil production on Monday suffered a fresh set back as Trans Niger Pipeline, (TNP) which exports about 180,000 barrels of crude oil per day was shut down.

The move is a temporary measure after a fire was seen on the “right of way” at Gio community in Ogoni land, one of the two pipelines that export Bonny Light crude oil.

According to the spokesman for Shell Petroleum Development Corporation (SPDC), the operator of the joint venture with Nigerian National Petroleum Corporation, NNPC, Precious Okolobo, a joint investigation visit will determine the cause and impact of the fire.

However, the Niger Delta Avengers, a group that has claimed responsibility for a string of attacks on Nigerian oil infrastructure this year, said it had struck a Bonny Light pipeline, ending several weeks of calm under a ceasefire with the government.

A spokesman for the militants had said in an emailed statement that the attack on Saturday was in the sea near Bonny island, making it unclear whether the incidents were related.

The joint probe of the leaks and corresponding spills is done with the federal government agency, the Nigeria Oil Spill Detection and Response Agency (NOSDRA).