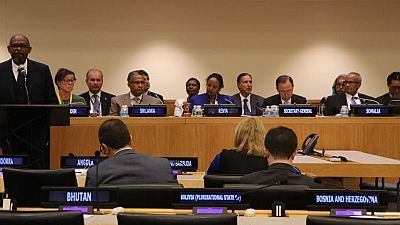 The United Nations failed to garner the targeted $300 million to help prevent violent conflicts and sustain peace in 20 countries over a three year period.

Twenty-six countries on Wednesday in New York pledged $151 million to the UN Peacebuilding Fund which needs a working capital of $100 million per year to cover between 2017 and 2019.

Kenya pledged 100,000 US$ towards the UN Peacebuilding Fund pic.twitter.com/qEkYZbdpaE

Co-hosted by 8 governments including Kenya and Somalia, Secretary-General Ban Ki-moon was hopeful that the amount pledged will help continue the peacebuilding work in the short term while solutions are sought.

“Without the Peacebuilding Fund, we will be forced to stand by as we witness the preventable loss of countless lives and the extinguishing of hope for millions more,” he cautioned.

Kenya’s foreign minister Amina Mohamed believes much needs to be done to change mind-sets in how peacebuilding is managed.

“A change of mind-set in how we go about doing the business of peace also requires a different kind of players, a different kind of willingness and commitment in how we invest in the peacebuilding complex, including prevention … Today we saw a good initial step in that direction. There is still much work to be done,” she stressed.

Despite its importance, the PBF perennially faces a desperate funding shortfall #UNGA pic.twitter.com/d5E970K7E8

Created in 2006, the fund helps support other UN agencies in their peacebuilding efforts when countries emerge from conflict and funds are not available.

Their mandate was also extended to include conflict prevention.

The top ten beneficiaries of the fund consists mainly of African countries including Burundi, Guinea, Central African Republic, Sierra Leone, Liberia, Ivory Coast, Guinea-Bissau and the Democratic Republic of Congo in that order.