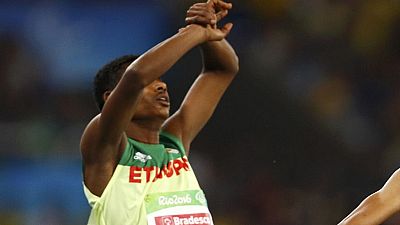 An Ethiopian Paralympic athlete, Tamiru Demisse, crossed his arms above his head after finishing second in the Men’s 1500m race in Rio. He did same during the medal ceremony.

Tamiru finished behind Algeria’s Abdellatif Baka who took gold in the event. His gesture follows that of fellow athlete Feyisa Lilesa who also won silver in a marathon during the Olympic Games. Kenya’s Henry Kirwa won the bronze medal.

Crossing arms is a sign of protest against Ethiopian government’s treatment of the Oromo people, the largest ethnic group in the Horn of Africa. The protests were sparked after the government began extending the municipal boundary of the country’s capital, threatening parts of Oromia and the people’s land rights.

Demisse Tamiru of Ethiopia showed defiant protest gesture at Rio Paralympics and repeated the same during the medal ceremony.#Ethiopia

The Ethiopian contingent returned home without Feyisa, who later got asylum in the United States for fear of persecution if he returned home.

Days after Feyisa, another Ethiopian marathoner, Ebisa Ejigu, made headlines for crossing his hands above his head as he race to victory in the Quebec City Marathon in Canada.

The protests began in a small town named Ginchi, approximately 80 kilometres outside of the capital. Both Lilesa and Ejigu are from Addis Ababa or the surrounding area.

According to human right groups, security forces in the East African country have killed scores of people in recent weeks in a series of brutal anti-government crackdown.