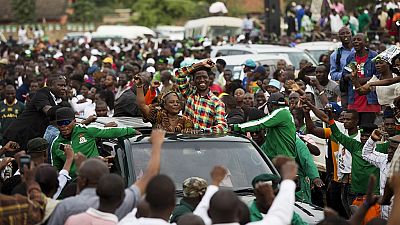 Zambia’s Constitutional Court has thrown out the election petition case filed by the main opposition United Party for National Development (UPND) against the re-election of President Edgar Lungu.

The court ruled on Monday that the fourteen legal days stipulated by the constitution for an election petition hearing had expired last Friday therefore it cannot continue the case.

“This petition will not be considered by this court,” the judge Annie Mwewa Sitali ruled after three of the five judges on the panel decided the petition should not be heard.

This is the fourth but final time the court is giving a ruling.

The first was given by Judge Annie Mwewa Sitali who ruled last week that the hearing would start on September 2, 2016. She later overruled herself and said the petition ought to have started and ended last Friday.

The full bench again decided that the hearing will continue this week (starting today).

The opposition candidate Hakainde Hichilema is contesting the results of the August 11 elections blaming the incumbent and the Electoral Commission of Zambia (ECZ) of rigging the elections.

The ECZ declared incumbent president Lungu, the winner of the polls with 50.35% and UPND’s Hichilema second, among the nine candidates, with 47.35% of the votes.

President-elect Edgar Lungu’s inauguration was postponed due to the election petition filed at the court.

The government announced on Monday afternoon that the inauguration of the president and the vice president will be held on September 13, 2016 in Lusaka.