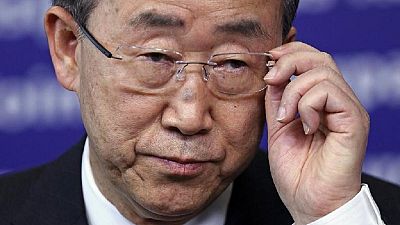 ‘‘I call on the government to immediately restore communications, especially the Internet, SMS and the independent radio and television,’‘ a statement attributed to Ki-moon read.

There were reports on Thursday that the government had blocked access to social media and other forms of communication amid the opposition protests that broke out following the electoral victory of incumbent Ali Bongo Ondimba on Wednesday night.

‘‘I am deeply concerned and saddened about the crisis in the Gabonese Republic provoked by the electoral crisis, in particular the arson attacks and disproportionate response of security agencies that has led to unfortunate loss of life and property,’‘ the statement added.

Ban Ki-moon reiterated his call for major political players in the country to urge their followers to exercise restraint and resort to the appropriate channels in seeking any post-election redress.

He also stated that the UN backed calls by the European Union (EU), the United States and French governments calling ‘‘for a transparent verification of election results. I call on the responsible institutions to deal swiftly, transparently and fairly with all complaints related to the presidential election. The Gabonese people deserve a credible electoral process,’‘ his statement concluded.

President-elect Ali Bongo Ondimba was declared winner of Gabon’s presidential election after polling 49.80% of the votes while his main opponent, Jean Ping polled 48.23 %.

According to the official results announced on Wednesday by the Minister of Interior, Pachomius Moubelet-Boubeya, Ali Bongo as president-elect of Gabon beat the 73-year-old Ping with only 5,594 votes.