Production of phosphate in the mining town of Metlaoui, south east of Tunisia has been brought to a stand still by sit-in protests from local youths demanding employment and economic opportunities.

This is according to the Gafsa Phosphate company’s head of communications who said production was already partial for several months but since the protests began, it has completely stopped.

The company also said the demonstrators prevented the workers to board the bus so that they could access production sites and blocked all the entry and exit points of the company.

As for the protesters, they have vowed to continue staging protests, until the promises made by the outgoing government of Habib Essid in June last year regarding their employment have been fulfilled.

The union government headed by Yousseff Chahed has quickly taken up the matter and has announced it will be holding a meeting at the government headquarters to review the issue.

Tunisia’s phosphate companies have been faced with interruptions due to protests that have been on the rise since 2011 when the Arab Spring started.

The siege at Metlaoui is expected to affect nationwide production of the mineral because it accounts for 60 percent of the country’s output. 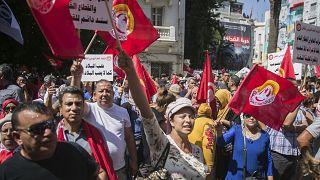