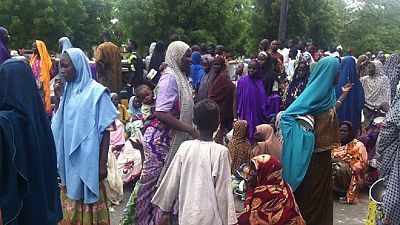 Over 500 internally displaced people took over the streets of Maiduguri, capital of Nigeria’s Borno State, to protest over neglect by the state and federal governments.

The protesters dominated by women and children were decrying hunger and thirst in Internally Displaced Persons Camps (IDPs), a situation that has been highlighted by aid agencies and human rights groups.

Camps have been established in different parts of the country to take care of the people displaced by the Boko Haram insurgency. Many of the people living in these camps have lost their family and property due to attacks by the militant group.

Aid agencies continue to sound alarm over the depreciating humanitarian conditions in IDP camps in the region. The World Food Program recently requested over $52m to support some 700,000 victims of the insurgency.

The Nigerian army is in charge of security in most parts of the restive Borno State, which was the main base of Boko Haram terrorists who until recently had hoisted their flags in most Local Government Areas in the state.

The Army insists that Boko Haram have been restricted to the Sambisa forest and occasionally send young female suicide bombers to inflict harm on soft civilian populations. Since President Buhari came into office, a huge counterinsurgency by the Nigerian Army has pushed them back, restricting their audacious forays in the past.

The six year old insurgency by Boko Haram has already resulted in the displacement of more than two million people across the Lake Chad region comprising Nigeria, Cameroon, Niger and Chad.