Streets deserted during renewed protests in some Ethiopian cities 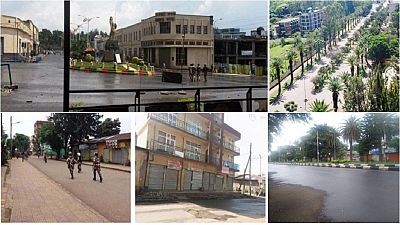 Three days into a renewed protest, this time a stay at home protest in the Amhara region in northwestern Ethiopia, life has come to a halt as the streets have been deserted and businesses shut down as at Wednesday.

Residents in the capital of the Amhara region, Bahir Dar, observed the shutdown since Sunday in continuation of anti-government protests that turned violent in several cities since July.

Deserted streets in #Ethiopia's city of #BahirDar, due to “stay at home” protest against the regime. #AmharaProtests pic.twitter.com/PkM2CQyLp5

Government offices, businesses and transportation was shut down while the streets of this otherwise hustle and bustle town were quiet on the third day of the stay at home protest, Ethiopian television ESAT reports.

Last week, Gondar started observing the shutdown which is reportedly continuing in protest against the killings by Ethiopian security forces in the city when thousands protested earlier in the month.

Hundreds of people are believed to have been killed by security forces since the protests started in November last year. Many others have been detained while others jailed.

Human Rights Watch says more than 400 people have been killed in clashes and the government has disputed the figure.

International bodies as well as countries have called for the respect of human rights, the release of detained protesters and an investigation into the violence.

The Ethiopian Prime Minister Hailemariam Desalegn has however banned demonstrations in the country while authorizing the police to use all necessary means to prevent them.