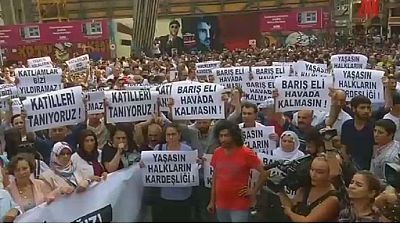 Hundreds of Turks took to the streets of Istanbul on Sunday to protest the killing of at least 51 people during a wedding in the Turkish city of Gaziantep near the Syrian border.

The protesters were voicing anger and accusing Turkish officials of not doing enough to protect them.

“The massacres’ (perpetrators) without any doubt are those who attacked Suruc, Ankara, those who have been bombing Kurdish towns for more than a year. The outcome of these attacks is that we understand that the only way to prevent these massacres is social peace,” protester, Ridvan Ozturk said.

Turkish President Recep Tayyip Erdogan said on Monday that it is now clear that the attack was carried out by the Islamic State. Turkish officials say the bomber was not among the 51 people killed during the attack.

The wedding had been for one of the Kurdish Peoples’ Democratic Party. The groom was wounded during the attack while the bride was not touched.

“If a child in Gaziantep comes and blows himself up, this is not the child’s decision and this activity is not something that a child is able to do. They cannot do this without getting support from intelligence etc. As the government, if you don’t work to(resolve) this, as you see, they come and bomb the parliament,” Selahattin Dermirtas, co-chair of the People’s Democrartic Party told reporters.

A series of funerals have been organised across Turkey to mourn the dead.

A series of attacks have happened in Turkey in the past year usually claimed by Kurdish militants linked to the outlawed Kurdistan Workers’ Party or blamed on ISIS.