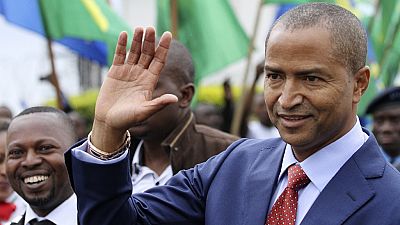 <p>Leading opposition figure in the Democratic Republic of Congo (<span class="caps">DRC</span>), would be arrested if he returned to the country. This is according to the Justice Minister Alexis Thambwe Mwamba who was speaking on Monday.</p> <p>The TP Mazembe bank roller had earlier this month told Reuters news agency that he would return to the <span class="caps">DRC</span> where he had a ‘fight.’ “I’m going back to Congo. I’ve got a fight, a peaceful fight for our country to have the first peaceful transition,” Katumbi said.</p> <p>“If Mr. Katumbi returned to <span class="caps">DRC</span>, he will be sent to prison, that is the law,” the Congolese Justice Minister Alexis Thambwe Mwamba. “For the latter, it is not a political conviction, let alone a special provision invented against him [Moise Katumbi]”.</p> <p>Currently in the <span class="caps">DRC</span>, there are two cases concerning Katumbi pending before the courts. A Court of Appeal in Lubumbashi is hearing a case of he (Katumbi) having threatened state security by recruiting US ‘‘mercenaries” to destabilize the country. </p> <p>On June 22, a month after he left to seek medical care abroad, the wealthy businessman was sentenced to three years in absentia in a property theft case. His lawyers have dismissed the sentence as part of a political witch-hunt.</p> <p>Katumbi who received the backing of a number of opposition parties is seen as the most potent political force against his former ally president Kabila, even though the president has yet to announce whether he will run for an unconstitutional third term.</p> <p>Majority of the opposition however rejects any extension of the term of Joseph Kabila. The latter, has been in power since 2001 and is widely suspected of maneuvering to stay in power when his second and final term – under the Constitution – expires on 20 December. A court has ruled that he could stay in power if elections slated for later this year fails to hold.</p> <p>Tension in the DRC is high and there are fears the political instability there could degenerate. The United Nations and other rights groups say the Congolese government has arrested dozens of its critics on trumped-up charges.</p>

If Mr. Katumbi returned to DRC, he will be sent to prison, that is the law.