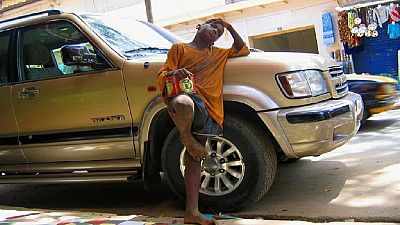 <p>Social welfare officers in Senegal say about 270 children were extracted from the streets of the capital in approximately 15 days since the commencement of efforts to rid the streets of Dakar from the menace of child beggars.</p> <p>The president, Macky Sall, announced the ‘clear up’ operation during the just ended Eid-ul-Fitr prayers. According to officials, half of the kids taken between June 30 to July 15 were ‘talibes’. Talibes are children supposed to be under the guidance of Quran teachers but are often sent out (sometimes forcibly) to beg for alms on the streets.</p> <p>“I have given very firm instructions to the government to stop this unbearable image of abandoned children in the street. It’s not because they are from poor or disadvantaged backgrounds that we should leave them to say thank you in the street,” he said. </p> <p>Dakar has over 1000 “daara” (Koranic schools) with 54,837 “talibes” out of which it is estimated that over 30,000 were practicing begging, according to an official survey in 2014.</p> <p>Aside chilkdren who were taken whiles begging on their own, others begging in the company of their parents or guardians, were also targeted by the raids.</p> <p>After the kids have been taken, they are given temporary stay in a center – with durations lasting from a few hours to several days – the children are then returned to their parents or their Koranic teachers, says Maimouna Balde, leader of the raids.</p> <p>According to her, in case of recurrence, their guardians or parents will be punished. The operation, still limited to Dakar, will be conducted “as long as there are children in the street,” she said.</p> <p>Families of children rounded up will be identified as beneficiaries of state programs, financial aid and taken through health management, Niokhobaye Diouf, the national director of the Child Protection told <span class="caps">AFP</span>.</p> <p>“Some black sheep are hiding behind this system of education to exploit children with begging, an easy and profitable trade,” Diouf said.</p> <p>The “talibes” in Senegal are forced by their teachers to report daily amounts of up to nearly 1,000 <span class="caps">FCFA</span> (about 1.5 euro), according to eyewitness accounts.</p> <p>A 2005 law banned begging by minors, but it is rarely applied. It provides two to five years in prison and a fine of <span class="caps">FCFA</span> 500,000 to <span class="caps">FCFA</span> 2,000,000 for perpetrators. (762-3050 euros)</p>

Some black sheep are hiding behind this system of education to exploit children with begging, an easy and profitable trade.