Rwanda confirms that al-Bashir will attend AU Summit without issues 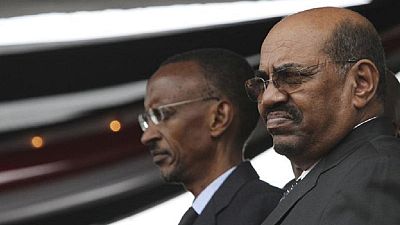 According to Minister Mushikwabo, Rwanda as a country was not against justice, adding that when justice is politicized, “we (Rwanda) have to think twice”, in apparent reference to the fact that al-Bashir was been sought more on political grounds.

‘‘Anybody invited by the AU will be welcomed and hosted. President Bashir is among African leaders, duly invited and we’ll host him,’‘ Rwanda’s top diplomat said in a series of tweets.

Anybody invited by the AU will be welcomed and hosted. President Bashir is among African leaders, duly invited and we'll host him.

.LMushikiwabo on President Bashir of Sudan coming to #Rwanda: Anybody invited by the AU will be welcomed & hosted. #AUKigali2016

Rwanda is not a signatory to the International Criminal Court (ICC) so President Bashir is guaranteed safe exit from the country after the summit of African Heads of State closes in Kigali.

Al Bashir is wanted by the ICC on charges of war crimes and crimes against humanity. The ICC has thus sought his arrest whenever he is in the jurisdiction of any of their signatories.

In the past few months, three African countries have failed to arrest the Sudanese leader. South Africa refused to ‘hold him,’ despite a pending court ruling as to whether or not Bashir is allowed to leave the country.

Uganda and Djibouti have also failed to arrest him on the request of the ICC. The international judicial body has recently reported the two countries to the United Nations Security Council for failure to go by the ICC’s arrest request.