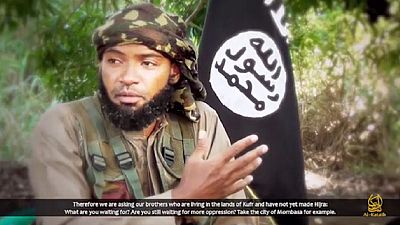 The leader of Somalia’s al-Shabaab insurgents, Ahmed Diriye, on Tuesday denounced what he called the “looting” of Somalia’s economy by Turkey. This was contained in his first audio message since gaining the leadership of the group in September, 2014.

Ahmed Diriye, also known as Ahmed Umar Abu Ubaidah, spoke for about 44 minutes in a speech entitled ‘‘Sharia or martyrdom.’ The speech has been widely broadcast on social networks and on Radio Andalus.

This was his first audio message on record as leader of al-Shabaab, a group that is affiliated with al Qaeda. Ahmed Diriye replaced the old supreme leader Ahmed Godane who was killed in a US drone attack in September 2014.

“The Turkish government is the enemy of the nation. Today, the economy of Somalia is in ruins because of his intervention,” said Ahmed Diriye.

“Turkey invaded this country economically and do not be fooled by the so-called development put forward by the Turks, keep in mind that the Turks plundering the resources of Somalia more than they help,” continued the al-Shabaab leader.

Turkey has significantly increased its presence in Somalia in recent years. Ankara plays a very active role in humanitarian and reconstruction efforts. Turkish companies also manage the port and airport of the capital, Mogadishu.

Turkish President Recep Tayyip Erdogan visited Somalia in early June, during which time agreements were concluded on development projects and he inaugurated the new Turkish embassy, reportedly “one of the biggest Turkish embassies worldwide.”

Ahmed Diriye has also once again denounced what he called the “Crusader occupation invaders,” referring to Burundian, Ugandan and Kenyan contingent of the force of the African Union in Somalia (Amisom). He also called on the Somali people to join in the uprising.