Officers killed in Dallas during rally against police shootings 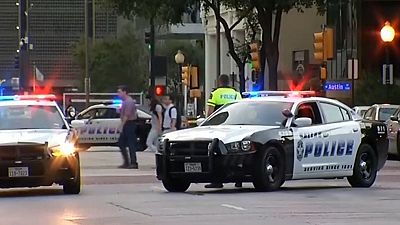 <p>At least four Texas police officers have been killed and seven wounded when gunfire erupted during a Black Lives Matters protest in downtown Dallas.</p> <p>The police chief said it appeared two snipers opened fire as the rally came to an end and the hunt for suspects is underway.</p> <p>Thousands of people took part in Black Lives Matters protests across American cities in response to two fatal police shootings of black men in Minnesota and Louisiana.</p> <p> </p> <p>Speaking as he arrived in Warsaw for the Nato summit, President Obama said of the shootings:</p> <p>“This is not just a black issue. It’s not just a Hispanic issue. This is an American issue that we should all care about. All fair-minded people should be concerned.”</p> <p>Videos showing the deaths of Alton Sterling in Baton Rouge and Philando Castile in Minnesota at the hands of police has forced the US once again to confront issues of race and violence towards the African-American community.</p>