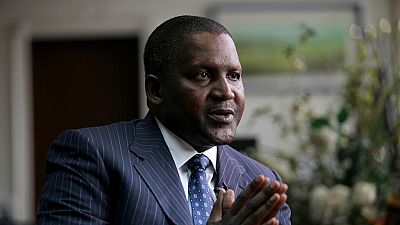 <p>Nigerian billionnaire and Africa’s richest person, Aliko Dangote’s fortune fell $3.7 billion knocking him to No. 71 on the Bloomberg ranking, down from No. 46 on Friday.</p> <p>Dangote fell 25 places on the Bloomberg Billionaires index on Monday as the naira tumbled on its first day of trading without a peg to the US dollar.</p> <p>Majority of Dangote’s $12.7 billion fortune is derived from a 91 percent stake in Dangote cement <span class="caps">PLC</span> which shed 2 percent in trading on Monday.</p> <p>The central bank had began auctioning dollars to limit the currency’s decline.</p> <p>The bank had been using capital controls to stem an outflow of dollars after the naira crashed in February 2015 when oil prices slumped.</p> <blockquote class="twitter-tweet" data-lang="en"><p lang="en" dir="ltr">Dangote loses $3.7bn as naira’s value drops <a href="https://t.co/MJges77weR">https://t.co/MJges77weR</a> via <a href="https://twitter.com/YNaija"><code>YNaija</a> on Twitter and Facebook</p>&mdash; Y! Online (</code>YNaija) <a href="https://twitter.com/YNaija/status/745237999441612800">June 21, 2016</a></blockquote> <script async src="//platform.twitter.com/widgets.js" charset="utf-8"></script> <p>Dangote’s slide came as equity markets worldwide surged on the hopes that British voters would choose to remain in the European Union.</p> <p>The second biggest drop in the latest ranking belongs to US casino billionaire Sheldon Adelson whose Las Vegas Sands fell 5.6 percent along with other gambling stocks.</p> <p>This comes after reports that revenue was trending downward. Adelson, who lost $1.1 billion on Monday, is the world’s 29th richest person with $23.3 billion.</p> <p><strong><em>Press Agency</em></strong></p>